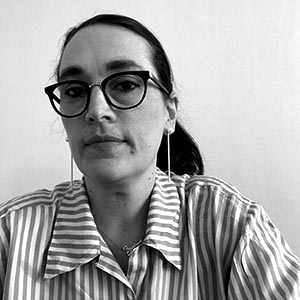 I’m a part time freelancing graphic designer. I’m also the Program manager and senior lecturer in Graphic Design and Visual Communications at Beckmans College of Design. I’m one of the founders of Hall of Femmes, an initiative to highlight the work of women in the field of art direction and graphic design.

I see all of these practises as linked to an interest in connecting people to ideas and knowledge. Through design and art, I think there’s a possibility to engage in a multitude of perspectives, helping us understand more about the world. Through my work as a designer and teacher I’ve tried to broaden the perspectives of who is heard, seen, recognised – hoping to contribute to a more vivid design scene and history. Who and what can belong to a field of art –  to its history, to certain questions, rooms and interpretations? How can a designer’s or artist’s work change the way we perceive certain questions and make us see the world in a new way?

Hall of Femmes (2009–) aims to revise the history of design and inspire and raise awareness of gender equality within design, architecture and communication. The project was founded in 2009 with Angela Tillman Sperandio and includes lectures, exhibitions, podcasts, seminars and a book series, each book portraying a designer and her work through in-depth interviews and previously unpublished images. In May 2013, Hall of Femmes produced a two-day design conference held at Moderna Museet in Stockholm with prominent speakers from the world of visual arts, communication and fashion. Invited speakers at the conference were: Barbara Kruger, Ruth Ansel, Janet Froelich, Ann-Sofie Back and Lucy Mc Rae to name a few.
Web page

Centan (2017–2020). A local bistro started in 2017. My role was in design and communication as well as being the creative director of collaborations with the local community, such as design commissions to the local school students and other local creatives and craftspeople.
Web
Instagram

Hjärta Smärta (2001–2011) was an award winning graphic design studio, established in 2001 by Angela Tillman Sperandio and me. The studio worked with a wide range of commissions – from identities to exhibition graphics and book design, but also with self initiated projects like Hall of Femmes. Hjärta Smärtas’ work is represented in the permanent collections of Nationalmuseum in Stockholm and The Röhsska Museum in Gothenburg.

I’m the head of the Visual Communication program at Beckmans College of Design in Stockholm, where I also teach courses in graphic design.
Web page

Swedish-Tunisian designer, teacher and publisher. Born in Sweden 1975. Worked within the field of design since 2001.