Through this artwork by Benjamin Von Wong, the artist presents a series of photographies of sculptures made out of electronic waste . In this project : rethink recycle revive, the artist and his team reached out to the people throughout these sculptures to make them think about e-waste and rethink the way we look at it.

To realize the project, Von Wong partnered with the world’s largest recycling program  by DELL who provided a space for artists and individuals to collaborate and help reduce waste. The artist interest was in cooporating with cooporations who were keen on having a positive social impact. 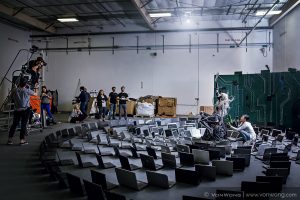 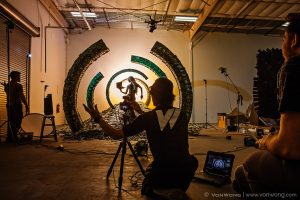 The artwork presented through these photographies are elaborated sculptures made of E-WASTE in a storage unit given as a space for the team to realize the project . Starting from pencil doodles and using the past to power the future he used his vision as a starting point.

If it would talk it would have another voice, an unknown one, and energy transmitted and unseen, felt like a pressure and lived as a burden between the past and the future.It shows what E-WASTE truly generates but in a very esthetic way . The surreal aspect given by the sculptures bring a bigger understanding of the treated subject and allow the viewers to be transported into the world created by Benjamin Von Wong. This view as surreal as is it links us and bring us into a closer connexion to and with the reality we live in, with our world and more specifically our electronics.

The artwork included the use of over 4100 lbs of E – WASTE , simple tools, paint and wood.  The structures created (a portal, arches, elaborates shapes ) seem to be coming out of this world and more into the future. This caracteristic gave the artwork a strong presence and stranght. It was brought to life using tools presented in front  of us everyday, and it brought a message whithin it. 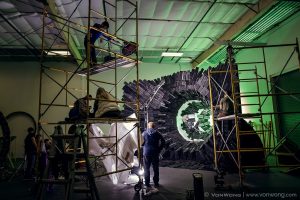 The structures were not built to be shown as a structure but as just a support for the photographies, only one angle was elaborated and light played here a big role in the realization of the final result. With improvised flashes and a broncolor move with an orange gel created the athmosphere need for the image to be complete .
The artwork was set to be shared as images online, no plan was made to show the sculptures used to the public, but the process and the outcome was clearly documentated , maybe to also show the backstage and how much technologie can do today. 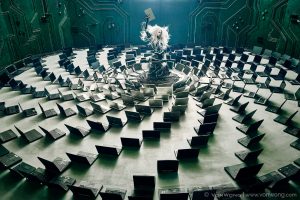 The images are vibrant, they give the impression of movement, challenging gravity and showing a world that is really out of ours. It is unique how with waste that we use everyday today, he created images that we wouldn’t normally see in our daily life or whan we think about E-WASTE.  The colors of the keyboards, electronic components and the presence of the mannequin in the middle created some sort of balance to the eye, when we look at the photographes we see them as whole, as a complete world, not dissasociated components  put together to create the sculpture.

The perception is axed on the mannequin, the lady in the middle, how everything converges to her, just like technologie is now surrounding each person so closely that they become whole, it situated the viewer in a criticla approach, we as the public ask ourselves on how we got here, what led technologie to be so much  connected to us, or maybe us connected to it . It situates the viewer in between his thoughts transported in the world written by the photography itself. 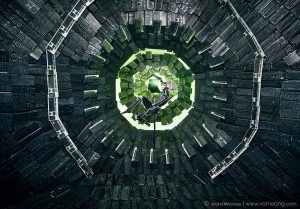 We can really detect the artist’s intention to push people to rethink recycling electronic waste throught his use of E-WASTE made to be recycled, by a coorporation encouraging these type of activities. Sheding the light on this issue came with a lot of creativity from Benjamin Von Wong who always thrives to realize projects where he incites the viewers to think not to just receive an information and that is what makes it unique.

#RethinkRecycleRevive is an initiative that pushes the public to be more responsible towards E-WASTE, shown in a very esthetic way and presenting images and setups that take us into another dimension.This artwork sheds the light on the awarennes we should have regarding E-WASTE to recyle responsiblily and revive it truly by producing from them new components that can be used . And even though the set lasted a day, the work was done by over 50 people and the images will last forever as a statement, as a point of view, as a message and a true way of thinking or more like rethinking E-WASTE .