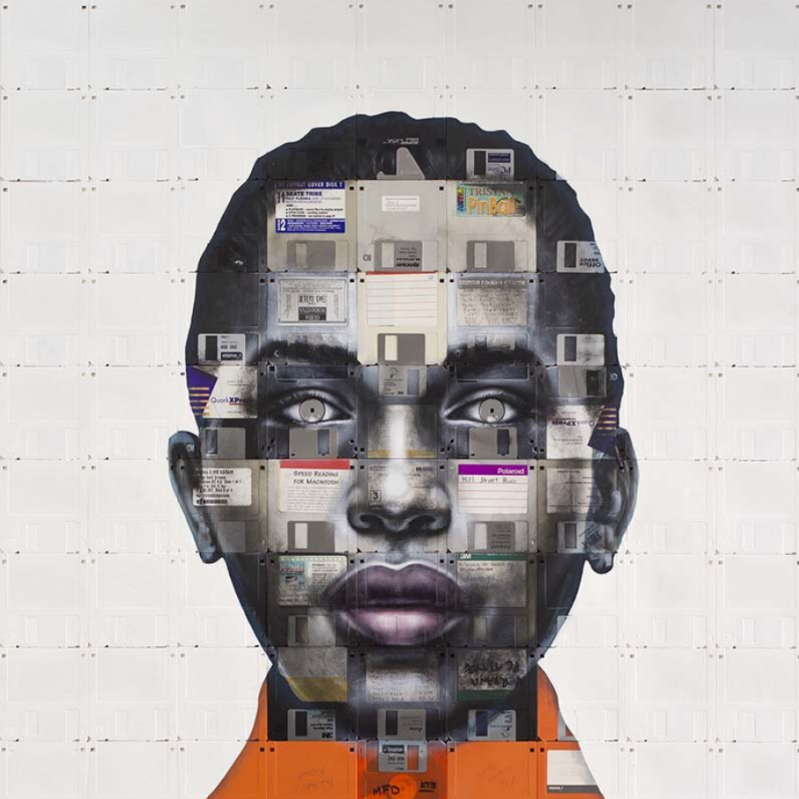 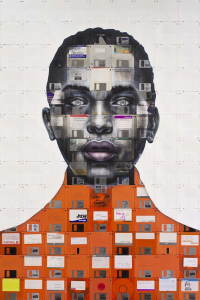 British Artist Nick Gentry, who works with the media of painting and recycled materials, has specialized in painting on old media supports, such as film negatives, floppy disks and VHS. At first glimpse, his media, brings attention towards the excess of production and the mismanagement of electrical and electronic waste, both from the digital and analogue eras.

The work is an oil painting on a matrix of painted floppy disks (9 x13 ), painted with three main colors ; white, orange and blueish grey. It covers 122 cm by 81 cm and hangs on a wood platform as a background and displayed in a white cube gallery.

The intrigue surrounding this portrait  pops out first after reading its title ” 1214 Gene” which refers to Ribonucleic acid gene 1214 , part of the Homo Sapien genome. While examining Nick ‘s artworks, the viewer may detect a pattern in the way the artists names his paintings, ” Lost moments” , “endorphin” , “X-File” , ” The Reproduction”, ” Life on Earth ” , etc ..  The chosen glossary alludes to the Human ‘s biological and philosophical existence plus its potential extinction in relationship to its interactions with the machine in the 21st Century.

Upon examining this elaborated piece , the use of floppy disks as background material for the painting is easily detectable. This choice suggest the importance of the e-waste topic through recycling obsolete electronic elements and adding value to them. This artform capitalizes on the notion of reusing old technological mediums and encourages the viewer to start questioning the reason behind this choice, is it an ecological act or does it embed further intentions ?

As we focus further on the tableau, we easily distinguish a larger than life , head and shoulder  portrait of young teenager from African descend wearing an orange jacket on a white background. The portrait is rendered with great definition with an emphasis on the eyes , as their irises look inhuman from a color perspective and are perfectly centered which is explained by the use of the floppy disks circles to create them. After staring at the portrait for few minutes, a strange sensation takes place, as the painted person starts looking robotic and  might appear too geometrically perfect to be human , especially with their neutral stare and facial expression that creates mixed conflicted feelings. Additionally, the chosen color to paint the face is grey with a blue-grey which in the context of human flesh , it may refers to death and after-life. Gazing at the figure, it felt like having a strange unscheduled encounter, it put reality into question , is it real .. is it happening .. is it taking place now or is it just an an illusion ?

If this character would have a voice, it may have been electronic , relatively medium to high pitched , robotized, gender neutral and probably speaking with a monotonous tune. I can picture this young character popping appearing in 3D form from a hologram sharing information on the post-truth era or on how humans have been living in vicious production-consumption cycle. This portrait appears to be travelling back from the future , where it can be a robot or cybernetic organism and when considering  its humanistic and realistic characteristic, its emotionless eyes, the minimal white background and the working themes of Nick Gentry, this work alludes further to cyber realism.

Conceptually, the  presence of the notes and comments on the used floppy disks adds another layer of questions regarding this intentional artist choice. The relation between the human written notes marks the human touch and presence is directly conflicting with the robotic nature of the figure and blurs the line between the past and the future. Knowing that  floppy disks were  used to store data from personal to professional and that its all collected from the personal library of the artist or collected from volunteering individuals nurture more that perplexing relationship between the history medium and the potential futuristic period or dimension that this  figure belongs to. The provoked psycho-emotional response of ambiguity and uncertainty can convey the artist feeling or opinion about the high consumption rate that our modern society is having and where it will lead the world ahead. It can possibly hints towards  how humans are turning more into machines with all the technology and progress in our access and how our touch of reality is diminishing and how our humanity is fading out slowly.

1214 GENE with its larger than life imposing figure , represents an encounter that brings up questions and ideas that we are trying to evade on daily basis such as the future of earth and the human-machine relationship. Nick has successfully, offered an opportunity for the viewers to wonder and reflect upon their existences by questioning the robotic-realistic duality of the portrait and how it might be connected to its background mediums. 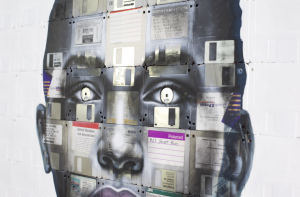 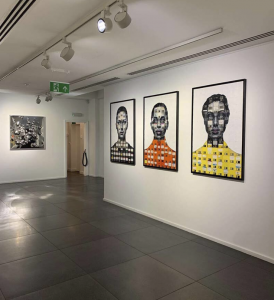