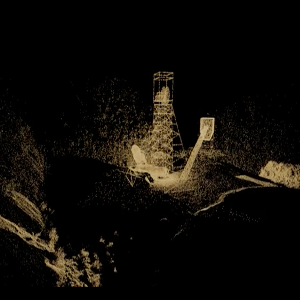 I have developed a deep appreciation for the work of Louis Henderson, a British artist and filmmaker. His medium of expression is film, and his films often steer towards documentary-fiction as a genre, where he employs fiction to probe the malleability of reality, from which new ideas and forms can emerge. His films act as conscientious explorations, giving shape and form to his research and investigations into subject matter. In interviews, Henderson often describes his approach to filmmaking as archaeological, an approach which allows him to “understand the present by looking through pre-existing material and piecing fragments together”. I find this approach most fascinating, as he engages in a process of unearthing the layers that lie beyond the realities that are presented to us. This is an approach that is generally evident in his films, and especially so in Lettres du Voyant (2013), and All That is Solid (2014), which are two artworks that I have chosen to include in this exhibition. Both films infer the materiality of technology and present it against a backdrop of colonial legacies and practices of resource extraction, whilst situating it in the context of the neoliberal present. For this reason, I have decided to present them alongside one another.

Lettres du Voyant (40′) is a narrative film, where the narrator, an unseen protagonist, reads out a series of letters addressed to Henderson himself. In these letters, the protagonist, a visionary man of sorts, sets out to uncover and present to Henderson Ghana’s colonial gold-mining history and to trace links between these historical events and contemporary Ghana. The mystical concept of “Sakawa” is explored throughout the film, a spiritual and ritualistic practice that combines that use of Internet scams and Voodoo magic, which is presented as an anti-neocolonial act taken up by Ghanaians today, in light of the West’s historical amnesia, in retribution for the gold that was stolen from the Gold Coast. The film’s title, Lettres du Voyant, draws its name from Arthur Rimbaud’s letters, where one of the letters is recited in the film.

The film transports us below the Earth’s surface, deep within the digitised tunnels of gold mines, a subterranean realm, where gold and technology are heavily intertwined. From these depths, a modern miner is born, bound to Ghana’s electronic wastelands, in search of traces of precious metals that can be found in the heaps of discarded electronic devices. These miners however, appear to be in search of a different material: the remains of information that they can use in order to extract Gold from the Internet. Thus, the film subtly draws a parallel between the search for metals in mines, and the extraction of metals from e-waste, alluding to the neocolonial logic inherent in capitalist systems of extraction and exploitation. Yet, importantly, the film never fails to recognise the agency of these men, who are doing all that they can with all that they have to take back their fate into their own hands.

Henderson takes us on a delicate journey in which the real and the fictitious exist side by side. The narration is both poetic and imbued with meaning, and the pace at which it unfolds never feels rushed. Instead, a necessary spaciousness is granted that allows new associations to take shape and crystallize. In the end, although the narrator signs off, suggesting that he has shown Henderson all that there is to see, the film does not offer any definitive conclusions, but rather, the final scene of young Ghanaians dancing in the discotheque halts us from deeming the film as a desperate call for help, and instead, reminds us that Ghanaians are resisting the neocolonial logic of a world that has turned its back on them.

All That is Solid (15′ 40″), on the other hand, is a short film that emerged from Lettres du Voyant. It is a film that brings together found footage, as well as, re-edited footage from its predecessor, and employs a method where footage is cut up and rearranged in radical juxtaposition. In the film we are presented with fragments of footage from an online Internet search, a mine, an e-waste graveyard, an Apple advert, and a tour of Microsoft’s data centres. Connections between this seemingly unrelated footage are drawn by layering and montage techniques. As a result new assemblages, where forms, histories and ideas are forged together, give rise to new vertical constructions of meaning that possess the capacity to challenge dominant narratives.

What transpires is an insight into the entanglement of our present-day techno-industrial paradigm with colonial legacies of extraction and exploitation. In the second half of the film, the concept of the “cloud” is introduced, where an Apple advert, along with scenes taken inside Microsoft’s data storage centres that house the cloud, are layered onto the scenes of the electronic wasteland. These stark juxtapositions illuminate the inherent contradictions of our current technological age, which can be interpreted as an attempt to dispel the illusive myth of technology’s immateriality. The title of the film, All That is Solid, is derived from The Communist Manifesto, offering a reflection on the material conditions that have shaped history and continue to do so today.

The film’s nonlinear narrative is never prescriptive, and instead the fragments of footage, sound and text used prompt the viewer to infer meaning by piecing them together. In this technographic study, Henderson employs his computer screen and the Internet as a site to layer and assemble footage, websites, text and sounds, producing what can be termed as a “desktop documentary”, where the computer screen becomes both the method of production and the frame through which the film is viewed. This could be read as an attempt to direct our attention, as users and consumers of electronic devices, to our own complicitness as agents in and of global capitalist systems.

Although film as a medium risks oversimplifying and flattening complex narratives, Henderson manages to maintain a critical sense of depth in both of these works, by presenting the histories and ideologies that lie beyond the images presented. Moreover, film’s affective nature equips it with a certain capacity to provoke a sensibility in viewers, as well as engender new understandings from within. In my opinion, these works, whether watched separately or in sequence, possess the power to rekindle a new sense of urgency as we are brought face to face with the dire consequences of our techno-utopian aspirations.

Henderson’s archaeological excavations, not only unearth the material histories and sociohistorical consequences of global systems of production, but also hint at the presence of something beyond the veil of our perceived reality, a presence that can be felt moving among us, attempting to make itself visible, demanding our attention. He evokes a sensation of being “haunted” (a phrase I borrow from Avery F. Gordon ), and what he appears to be engaging in, is in fact, the act of conjuring ghosts. Experiencing them as ghostly encounters, shape and form is given to the repressed and unresolved issues that haunt us, and his films become a site that bring us face to face with ideologies and histories that have been buried away and obscured from view. Thus what he achieves, is the opening up of a field of critical inquiry, drawing our attention to a history of imbalanced power relations between the West and Africa, dominated by colonial, capitalist and racist logics, that have haunted us for centuries and will continue to haunt us, unless we find the courage to confront and dismantle the conditions that keep these ghosts alive and returning to us.

I view this as an important and critical work, a work of impressive depth, one that possesses the capacity to haunt us, unless we choose to think, act and engage differently in the world. By including this work in the exhibition, I am at once optimistic about its ability to reconfigure any held misconceptions regarding the immateriality of technology and the foundations upon which it is built, but also, hopeful that it may force us to muster the courage within us to stop running away from the ghosts that haunt us and to confront them.

To watch Lettres du Voyant (2013) & All That is Solid (2014) please complete this form in order for a link and password to be shared with you.