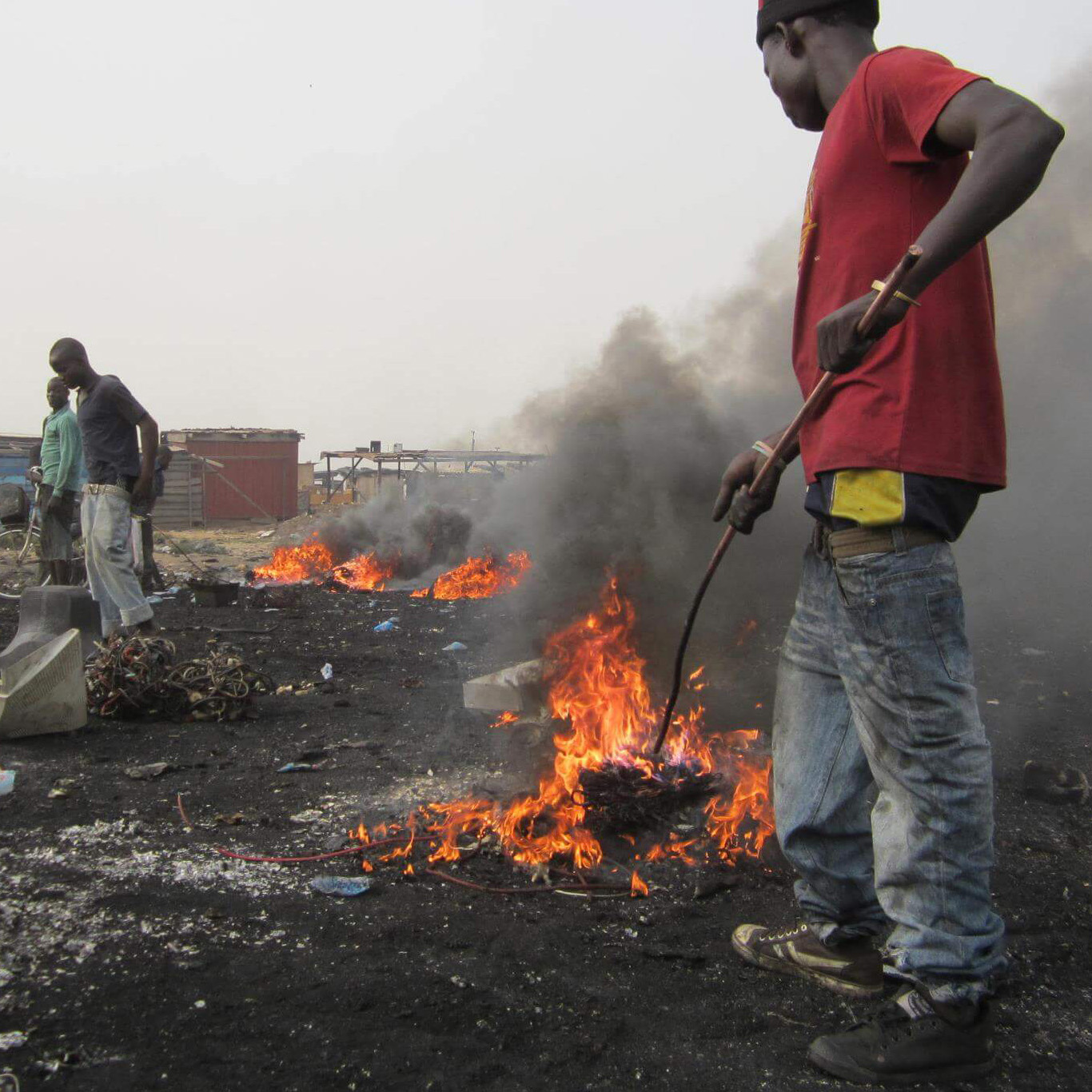 David Fedele is a freelance filmmaker and musician. Originally from Australia, he travels the whole world, dealing with humanitarian, environmental and social justice issues. What makes him remarkable is that he mainly self-funds all of his projects which are later on made available online with free access. He is really dedicated towards his work and a complete autodidact, doing everything by himself – such as his website, the whole production process and communication.

For this exhibition I chose his film ‘E-Wasteland’, which is a short film released in 2012. I have a preference for the medium film due to my own background as a costume designer working in film and theatre. For me it has a beauty of its own when someone is able to capture real situations and give them their own aesthetics and perspective at the same time. Observing the world, transferring these observations into another medium and thus making them accessible to other people – this process of building bridges between different worlds is familiar to me from theater. That’s why Fedele’s style, which he calls ‘cinematic journalism’, deeply resonates with me.

‘E-Wasteland’ was shown at several film festivals all around the globe and is also available on Fedeles Vimeo channel. The film is around 20 minutes long and contains different scenes with the belonging sounds of their environment. There are no interviews and no voice-over, only some explanatory texts which state some facts about the film’s topic: the unregulated recycling of e-waste in Accra, the capital of Ghana, West Africa. The film portrays the workers daily routine. It shows the men at their work, very close and detailed. What makes the film unique is, that it takes its time to just let the images speak for themselves and only gives little additional information.

Fedele is using a lot of long and steady shots, often from a lower camera angle. With these shots, the film bridges the border between the screen and the viewer. It creates the feeling of being right there, which is also supported by the original sound of the environment. At the same time, it provides space for one’s thoughts and interpretations. By confronting the audience with these unpolished images, Fedeles work stands out from other documentations. He does not emotionalize the issue, as he is not creating a feeling of “these poor people you have to feel sorry for”. It is reflecting a reality – just the way it is. It tells of routine, hard work and boredom. The film underlines the normality of its absurd images. It shows that something we do not know or we don’t think about means everyday life for some people, that it influences and occupies them and defines their horizons physically and financially. He shows unknown images in the boring familiarity of everyday routine work, creating surprise and overextension for the viewer, who may not know the images, but can relate to the feeling. By doing so, Fedele creates a far deeper connection between the images and the audience, drawing on the tension between identification and surprise.

I really like the narrative style and the aesthetics of ‘E-Wasteland’. Despite its short duration, Fedele takes his time to simply show what he sees. He does this gently, with a quiet sense of beauty, although the subject is not pretty at all. There is something shy about it, something knocking, not imposing. The film gives insight into a deep wound, without hiding it, without asking for help, without giving a solution. You can’t just cry and then go on. The film does not provide the viewer with relief through an emotional moment of solidarity. You solely can look at the situation and either be touched by it or not, either start thinking about it or not. In my opinion this confronts the viewer with himself and provokes a much more honest reaction. The same also applies to the title: a fictional term describing a real state that determines the whole country. It brings the concept of a dystopia to a concrete reality. Like this, he underlines the tragedy and asks the question of who is at fault. He takes the audience into responsibility.

I also really like the way Fedele works. There is no commercial interest behind it, he is solely working independent on issues he is really dedicated to. This personal connection is palpable in his works. He’s not just on site, he’s part of it. This open intimacy is something I look for, both in my artistic and curatorial practice. It creates a dialogue, a connection, the feeling of an “us”. Through his vulnerable honesty, Fedele does just that, he takes a step towards us.