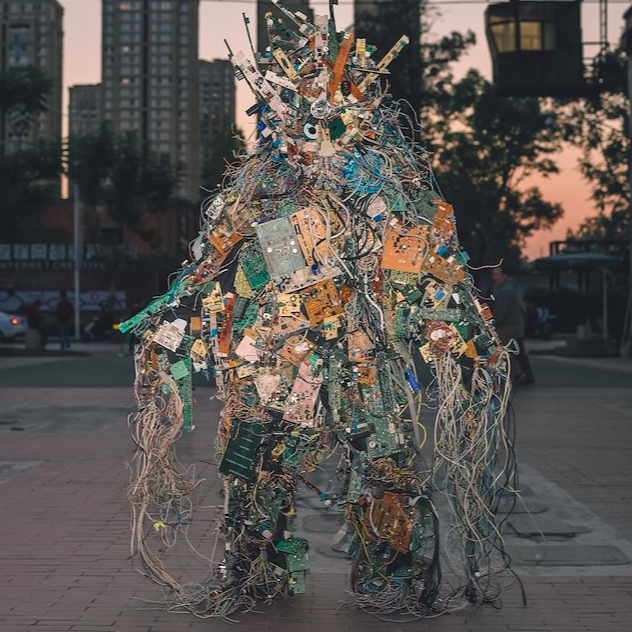 Core Dump, a research-based project, is a four-part video series by filmmaker Francois Knoetze, with a running time of 49’91”. Each of the films offer a fictional meditation on the unsustainability of the global capitalist techno-scientific system. The video series borrows its name from the computing term ‘core dump’, where Knoetze draws a parallel between the malfunctioning of a computers’ memory and the global flow of electronics in a hyper-connected world. Filmed in Dakar, Kinshasa, Shenzhen and New York, each of the films set out to unveil the invisibilized processes of global logistics that enable the seamless flow of commodities across the world. Drawing on fiction, mythology and utopic digital imaginaries, each of the films explore the relationship between the production, distribution and disposal of electronic goods underpinned by the West’s illusive notions of ‘progress’ and ‘technology’. What then seemingly transpires is an understanding of how deeply intertwined digital technology and colonialism truly are.

The first of the four videos, and perhaps also the most poetic, is set in Dakar (11’50”). It is centred around the story of a man that used to collect discarded electronic waste off the streets of Dakar to repair them, until he suffered from an explosion in his TV repair workshop, where he resorted to repairing himself the only way he knew how to- by turning himself into a cyborg. In his newly formed body, this man-cum-cyborg realises his new machinistic abilities; his ability to draw on historical materials in search for utopian futures that might offer the possibility of setting himself free from the prison of history. A significant portion of the film unfolds in his repair shop, where piled discarded television sets act as portals into history, where fragments of found and archival footage appear, offering us a glimpse into Africa’s post-independence history, a time when utopian ideologies and hopes were rife. This is then juxtaposed with footage from an electronic waste dumping site in Dakar, at once both horrific, and symbolic of the dystopian realities that many African states find themselves grappling with today. Throughout the film, Knoetze explores the relationship between humans and machines, whilst also critically drawing a parallel between their disposability, a symptom of our times. This film culminates at the Centre International du Commerce Extérieur with a re-enactment of a speech delivered by Leopold Sédar Senghor at the 1975 Non-Aligned Movement Conference, perhaps acting as a reminder of a galvanising hope that dominated public imaginaries.

The second film, set in Kinshasa (9’41”), sets out to unveil the colonial legacies that haunt Africa. Drawing on the writings of Joseph Tonda, this film employs an urban Congolese myth born in colonial times, that claims that a car’s headlights possess the blinding power to transform humans into pigs; an allegory that demonstrates the animalising violence of colonial powers. In the opening scene, which unfolds in a computer system, Knoetze builds on this myth and poses a second hypothesis: that light emitted from the screens of our electronic devices have the same animalizing force as they morph into the headlights of the colonial capitalist machine. Both significant and potent, it calls into question our relationship to electronic devices, through which we come to experience and see the word around us. By day, we follow the main character’s journey in the city of Kinshasa, where scenes from the city are punctuated by fragments of footage that hint at the city’s entanglement with mineral resource extraction and technology. It becomes apparent that Knoetze is bringing us face to face with the violent history of a country that has been cursed by a wealth of mineral resources, and punctuated by foreign intervention. By night however, the young protagonist transforms into a pig after being cornered by a car with its headlights on, only to be chased down the streets by community members frightened by his appearance, where he is forced into hiding. Upon escaping them, he falls into a dream state whilst in hiding, where a white ghost-like army general appears, evoking the sense of a past that continues to haunt the country till this day.

Set in Shenzhen (12’22”), the third film brings to life the Congolese mythical character, Mami Wata, a river spirit depicted in the film as a snake-like mermaid. As Chinese labourers lay miles of underwater fibre optic cables in the Congo River, they come into contact with the mythical creature and capture her. She is then transported back to Shenzhen, China’s first Special Economic Zone, and is transplanted into the context of the ‘world’s gadget factory’. In our present-day hyperconnected world, we witness how the African myth of Mami Wata is transported by the Internet across to Chinese shores, where it enthralls the manager of a gadget factory, eager to become the world’s richest woman. After asking the captured Mami Wata to grant her this wish, on condition of her son being cursed, the factory owner’s cursed son morphs into a monster made up of circuit boards and wires that dig into his flesh and engulf his body. Able now to feel every hand involved in the production of these electronic gadgets, as well as the pain of those involved in the mining of the natural resources of which they are made up of, the burden becomes unbearable, and he jumps to his death. What this offers is a sobering meditation on the state of capitalist production, as it exposes the hidden connections between Africa as a site of resource extraction and China a global production factory. By oscillating between Africa and China, Knoetze offers a necessary reflection on the nature of contemporary sino-african relations that have increasingly come to shape present-day Africa. Importantly, the film also visibilizes the invisible fibre optic cables that uphold our modern telecommunication systems, which lie motionless, crisscrossing across the earth’s riverbeds and ocean floors, a stark reminder of the materiality of the Internet.

Finally, the last film, set in New York (12’47”), presents a critical exploration of the illusive promise of progress and development that is intrinsic to the very foundations of Western modernity. The character that emerges in this film is Big Dog, a robotic creature that escapes from a lab. Big Dog is spliced into two halves as it attempts to mount the subway, and each half embarks on a distinct journey across the city. The final scene ends with the transportation and dumping of electronic waste on the shores of West Africa. Here, Knoetze exposes how the burden of the city’s culture of excess is hidden from view, as it is dumped on faraway shores, bringing the film full circle.

Knoetze’s use of fiction as a structuring device is certainly what makes these works most unique. Here, Knoetze employs fiction to carve out new worlds, creatively interacting with different urban landscapes and histories, allowing the global logistics system to be interpreted in all its complexity. Taking this further, fantastical-looking characters take centre stage in each of the films, which also importantly, present an extension of Knoetze’s practice as a costume sculptor. As fictitious agents, each of the characters interact with the urban landscapes they find themselves in, exposing violent and painful material histories, whilst tracing present-day consequences. Yet, despite this fictitious backdrop, Knoetze’s works are historically rich and are imbued with socio-political critique, and it is the sheer breadth and depth of research that I find most compelling about these works.

Central to all the films is the use of archival and found video footage, which Knoetze ‘recycles’ as he assembles these clips to support the narrative journeys. Through the use of montage and layering techniques, footage from otherwise distant spatial and temporal contexts come together, allowing a new narrative context to emerge, where each can be ascribed a new set of meanings. Knoetze’s ability to counteract linear notions of time is noteworthy, as he demonstrates how history, condemned to a so-called inaccessible past, can haunt the present, and possesses the capacity to stretch forwards into the future. The interplay between non-linear, fractured narratives coupled with the assemblages of found video footage enable connections to be drawn between the narrative, the interactions of the characters, and the content of the interspersed found footage. The soundtracks are also not to be overlooked, which are comprised of a rich selection of songs, electronic synthetic noises and voice-overs.

To exist in a world shaped by globalization, is also to recognize that we are complicit in it. Knoetze’s films demonstrate exactly this: how and at what cost. This film should therefore not only be viewed through an aesthetic lens, but rather demands that it is approached and recognised for its epistemic potential; its ability to make visible a nexus of processes in a system so vast, so complex, that at times can feel arresting. It is for this very reason that I have decided to exhibit this artwork.

To watch Core Dump (2018- 2019), please complete this form in order for a link and password to be shared with you.