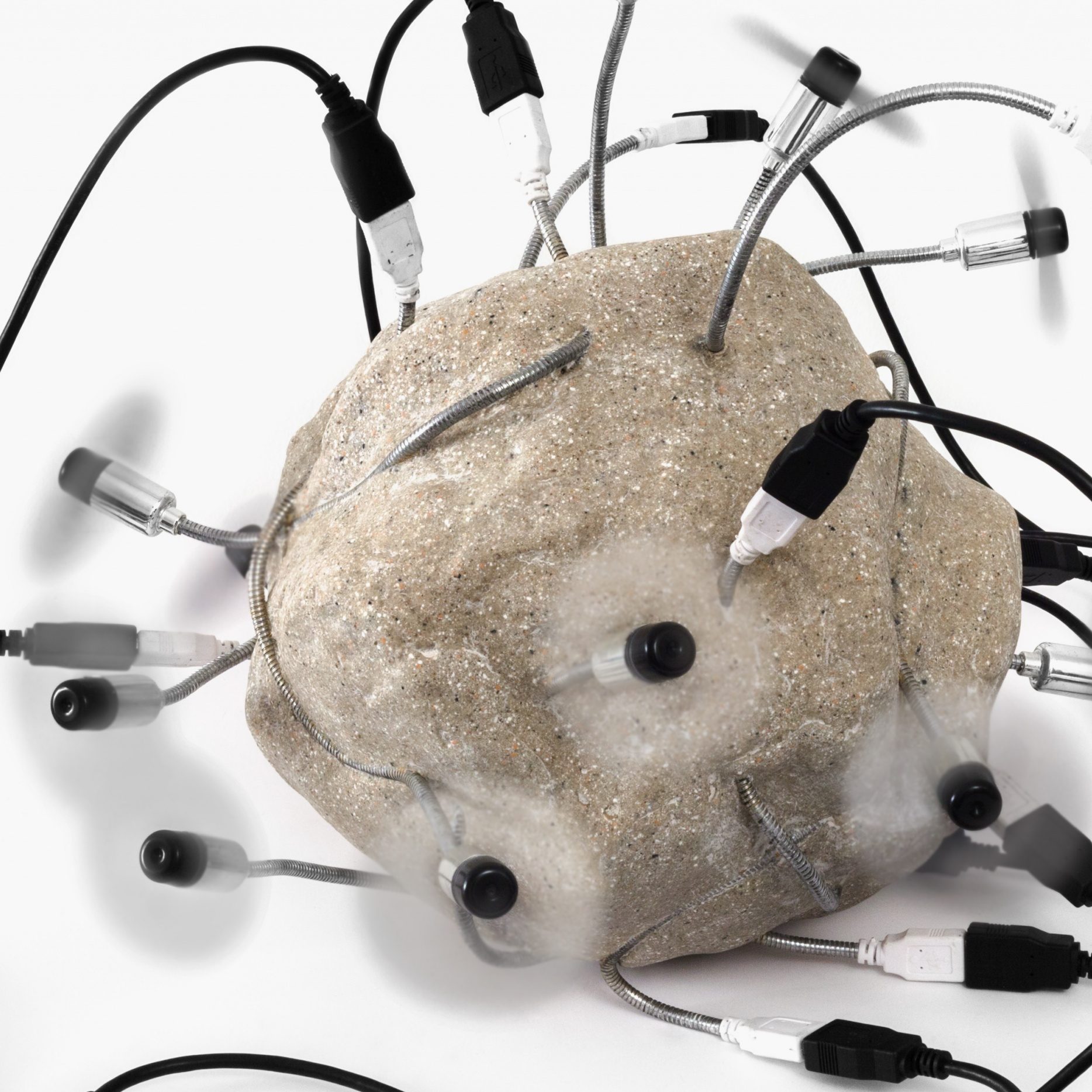 During the Tasawar curatorial program, when we started to prepare the ON | OFF exhibition on e-waste, it was a task for each of us to choose an artist whose work was a source of inspiration to start searching and prepare an artist profile to be ready for the online ON | OFF exhibition. We (Elham Khattab and Rania Atef) were surprised by our choice of the same artist: Katherine Behar – an American interdisciplinary artist and critical theorist living in the United States. We discovered how much we are fans of her work and thus she was our common choice. Without agreement nor preparation, we found each of us drawn to a part of her work, and each of us began writing about it.

“Katherine Behar: E-Waste” is an exhibition of sculptures and videos. Combining machine-made, handmade, and organic forms, including a “fossilized” 3D printer, the installation offers a meditation on consumer technology’s environmental impact, digital labor’s perverse acceleration, and big data’s corporeality. The exhibition premiered at the Tuska Center for Contemporary Art at the University of Kentucky in the United States in November 2014 and traveled to Eyedrum Art & Music Gallery in April 2015 and Boston Cyberarts Gallery in November 2015.

With some years of practice in curating digital and new media art, I was searching online for an established artist who presented an E-Waste topic through her/his artworks by using digital mediums and art. Between all the searches I did, I came out to discover the E-Waste exhibition by interdisciplinary talented artist Katherine Behar. Not only I was amazed by her established professional CV and practices but the E-waste exhibition attracted my attention because it was different from what I found before.

Modeling Big Data is a series of four videos presented as a six-channel installation that presents four data gestures from the point of view of the artist Katherine Behar. The four videos or the four data gestures are “Clicks,” “Buffering,” “Cached,” and “Pings.” Their compilations are shot in color on monochromatic sets. The first and third scenes are the two red scenes, “Clicks” and “Buffering.” The second and the fourth scenes are the two grey scenes, “Cached” and “Pings.” The sound of the video installation is layered and overlaps with itself, creating a sort of sound environment and echoes in all the space.

My first view to Modeling Big Data series and without getting back to the detailed description by artist Katherine Behar opened different questions in my mind. The title, sounds, and the scenes in the video series gave me a feeling that I am in four waiting rooms waiting for something unknown from the future. I did not have a choice but to wait in these waiting rooms and continue watching to discover these rooms while asking myself many questions. In these scenes or my waiting rooms as I describe them, I carefully listen to different internal computer sounds and I watch different objects transforming, or in other words, objects that breathe deeply.

Clicks
“Clicks” is the first scene in Modeling Big Data and it is the first red scene too. A red waiting area as I describe it is in the back of the scene while a dark pink object is hitting his head against the left side and breathing. While we see the slow movement of the pink object, we listen to the Clicks sound over and over. When you hear the sound in the first scene “Clicks”, you think of the clicks you are doing daily on your computer but at the same time, you think about how these clicks can be a breathing object.

Pings
“Pings” is the second scene in Modeling Big Data and it is the first gray scene too. A gray scene with lighting in a gray flower shape on the left side of the scene gave you the feeling that you are watching a gray ceiling and still waiting. This time, a circle object that we could not see clearly ran on the right side of the screen while we listened to Pings sound, like a video game sound. The Pings sound gave an echo to the scene while running back and forth.

Buffering
“Buffering” is the third scene in Modeling Big Data and it is the second red scene after the Clicks scene. The red waiting room is back but this time the dark pink object is on the right side and standing, you feel that the object’s head is out of the cadre. While the scene is fixed, the pink object is still breathing and moving slowly in slow motion. Buffering sounds gave you the feeling that this object is digesting all this big data.

Cached
“Cached” is the fourth scene in Modeling Big Data and it is the second gray scene after the Pings scene. This time, the gray scene has a wider view of the ceiling; we can see the gray light in a flower shape coming from the ceiling. At the same time, we see a gray object breathing and moving slowly while changing its shape. Sometimes it feels as if it is a heart of wool, however, what it is made from, clearly it gives the feeling of a heart shape beating slowly and moving. In slow motion and with the sound in the scene, you feel like an important object trying to find a way to beat and breathe while moving. The sound of the Cached scene became louder with the time moving as well as the object started to grow and change shape. By the end of the scene, it reached the middle of the cadre while having transformed into a big object that is still breathing slowly. It looks that it is heavy to breathe with this weight.

Katherine Behar succeeds to perform what she calls “an obese data body, a body that is so stuck in the cycle of generating data which is swollen and overcome by its own data glut.”

Watching the videos over and over led me to think about our daily life with big data and computers. It also opened many questions to my mind but the most important one I asked myself: Are we waiting to see what big data will do with our future or it is the big data that waits for our decisions as humans?

Delving into the “E-waste” series of sculptures of Katherine Behar, you can set foot in the exciting world that she has created from different objects and materials; USB devices, Magic-Sculpt, Foam Coat, Paverpol, Styrofoam, stone filler, sand, pigment, cords. The combination of materials and objects was able to produce sculptures, each one independent of itself and had a special character, but in the end, you can sense the existence of that world that they came from and belong to. Some parts have movements either rotating or working in a repetitive random motion like spinning fans. And some other parts imitate blue light or screen letters and numbers. You can easily notice and relate parts to objects found on your desk either cords, cables, or a whole body like computer mice or USB devices.

In my opinion, Katherine succeeded in smoothly creating a new world that includes sculptures that act as creatures who have their own invisible language that at the same time is strongly present. You can imagine that they are speaking to each other through signals, or gestures, or light pulses. Each is different in the way it looks, or the material used in its composition, or even the way that light emitted, but you can tell that they belong to the same era. Their names are a combination of letters and numbers for example: “ACP2F-OR4_38”, “ BK3F-033_3”, and “ UCM-GN4X” which in turn added touches of mystery and wonder to complete that scene of fictional futurism.

While researching Behar’s work, I found myself wondering, how we reached that level where machines besieged and dominated us? Is there a place for humans in this new world? Will they replace us indeed? Actually, I found an answer while reading Katherine’s text about the project – usually, I start viewing the artwork without reading the text then I start going back and forth between the text and the work- she is creating a science-fiction scenario that these devices will continue working long after the humans they were designed to serve have gone extinct.