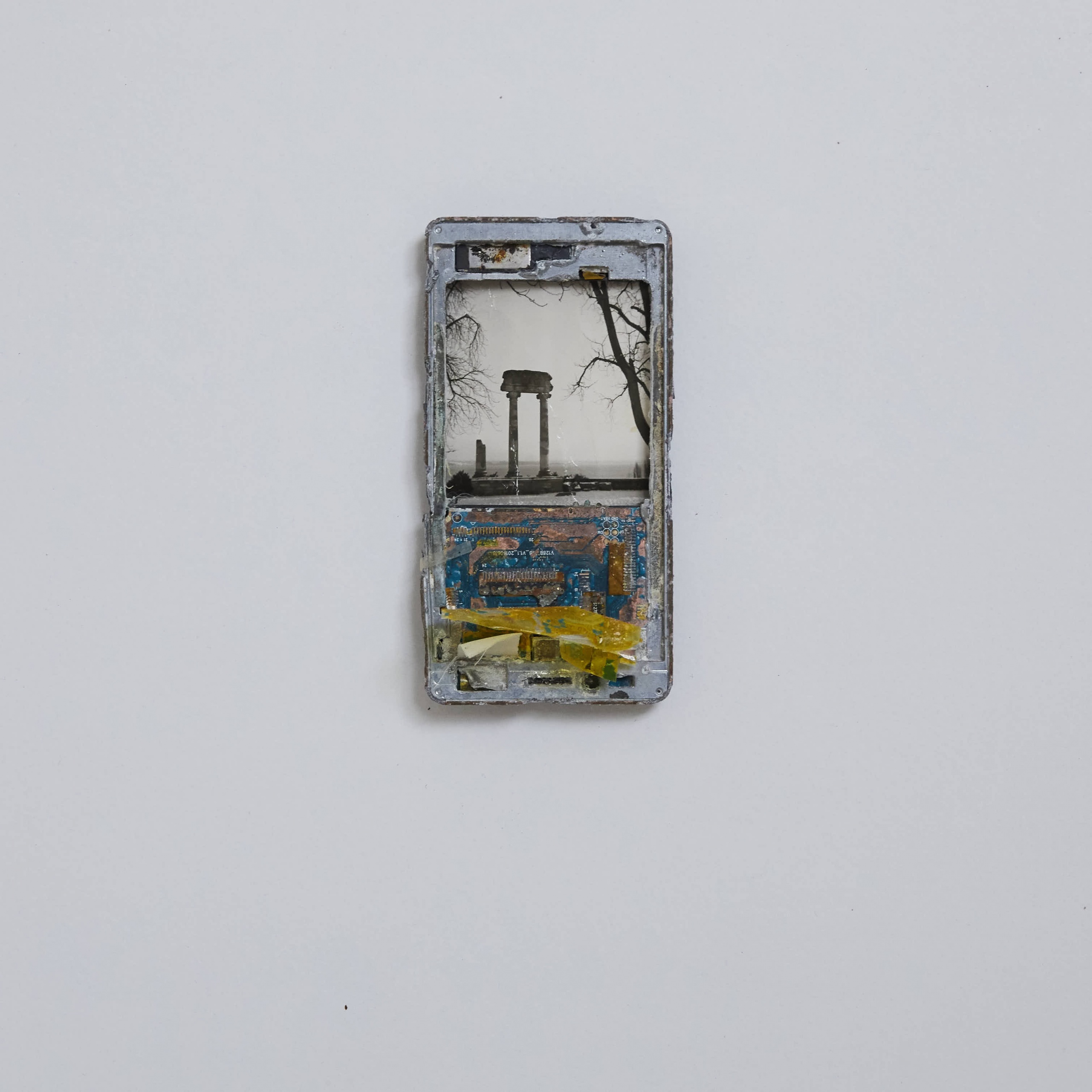 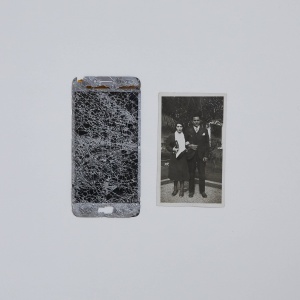 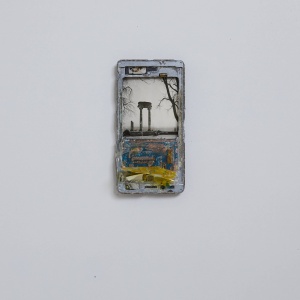 The two artworks Double Temporality and Future Archeology belong to the recent serie of artworks shown in the last exhibition News From Nowhere of Intissar Belaid and Moritz Hagedorn[1] in their home in La Marsa.

Let’s begin by a quick presentation of the hole exhibition to have an idea of the context and the general topic of it. The exhibition was presented in September 2020 and composed by different artistic medias (videos, installations, collages and photos). The collages were shown in a sort of a white box. Every box/show case was composed by different elements picked in the beach during the artist’ daily walk. The elements were composed by two categories: natural and synthetic objects. For the synthetic part it was mainly constituted by different objects like ice cream spoons, electronic components and even personal photos found. The natural part of the composition was made up of shells and stones. The exhibition confronts visual aspects which animate our daily life.

Let’s focus now on the two artworks: In the exhibition, the two artworks have been presented separately and each has an individual title. However, common points unite them and led me to present them together. First of all, what we can notice is that these two showcases are composed of two distinct elements: a paper photo and a broken phone screen. In the first one, the photo has been glued or inserted in the frame of the phone screen. In the second, the photo is placed next to the broken phone screen. If we focus on the dimensions of the photo, we can see that it almost fits to the screen dimensions, as it was made for it!

It is obvious that this relationship between the support of a virtual photo, in this case, provided by the broken phone screen and the real (if I dare say so) paper photo raises a first question about photography and its tools of today. The two paper photos are placed as a real trace of a captured space and time. As for the broken screen, it refers to this close link between the support of the photo and the photo itself. Indeed, with a broken or damaged screen, we can no longer visualize our hundreds of acquired photos. The digital photo is fragile because of its link with its support, which is essential to see it. This link that unites them makes the gesture of photographing perilous with the risk of loss and creates the alienation of today’s individual to his camera. The telephone would be a device of communication, shooting and storage at the same time.

Let’s now come to the contents of the two photos, found by chance in the street. Both of them date from an ancient temporality that we can deduce from the format, the visual aspect and the style of the couple’s clothing. This ancient temporality is faced with a destroyed current temporality represented by the broken screens. An interpretation of a temporal duality thus imposes itself from these elements. The new destroyed facing the old in good condition. Would it be a position of the artist in relation to the time we live in today?

The photographed subjects evoke a glorification of the past time. The simple and rigid pose of the couple differs from the current poses and the selfies we take all day long. From this pose, we can read the rigor that combines with the capture of the moment. The moment becomes precious and recording it is a unique operation given the technical difficulties that had to be solved to have a precious memory. Our parents and grandparents have the number of photos we can have in a month. Our relationship to the photo, which is none other than a memory of a moment, has changed. This reading comes from this confrontation between the old photo and the screen of a today’s phone.

But in the end, both elements were thrown away and the memories are now the property of the artist and the public. It is this process of collecting souvenirs and objects that is highlighted through the exhibited window. For me, these showcases represent this closed and precious space of the collection of the archaeologist artist’s finds. It guides us through her different choices (collection, selection of objects, composition and finally of the final presentation) in our reading of the present time and the possibility of future “past-present” projection.

Collecting is almost an infantile act, the one who marvels at the perception of an object that seems precious and unique. Then comes the gesture of storage in pockets and it is in this that all the objects found and exhibited are small in size that recreate the path of discovery.
In the connections that are established between objects, we could perhaps read a memory of a culture or civilization and what it will leave for future generations. It is in this sense that these showcases acquire an anthropological aspect and that this approach becomes archaeological. The archaeology of the future?

In the ON | OFF exhibition dedicated to the theme of E-waste, Belaid’s work is part of a particularly poetic approach, that of a raw reality whose verses no longer rhyme. The proximity created between the artist and the real found objects and the proximity between the public and these objects marks a first welcome and an easy penetration into this work. The work uses materials that the public recognizes.  The composition and the arrangement of the elements constitute the framework that animates our perception of this subjective reading of the artist. In my opinion, the use of real objects allows for an easier and more subtle introduction to the artist’s world. It facilitates the deciphering of the codes of a work that seems at first sight conceptual. Moreover, the reduction of the composition to two elements (outside the framework of the box presentation) makes the interpretation of the links more distinct and clearer. In works dealing with E-waste, the composition, sometimes overloaded with electronic components and different elements of the computer world obstruct the entry to the soul of the work.

[1] German photographic artist who co-exhibited with Intissar Belaid in News From Nowhere in September 2020.