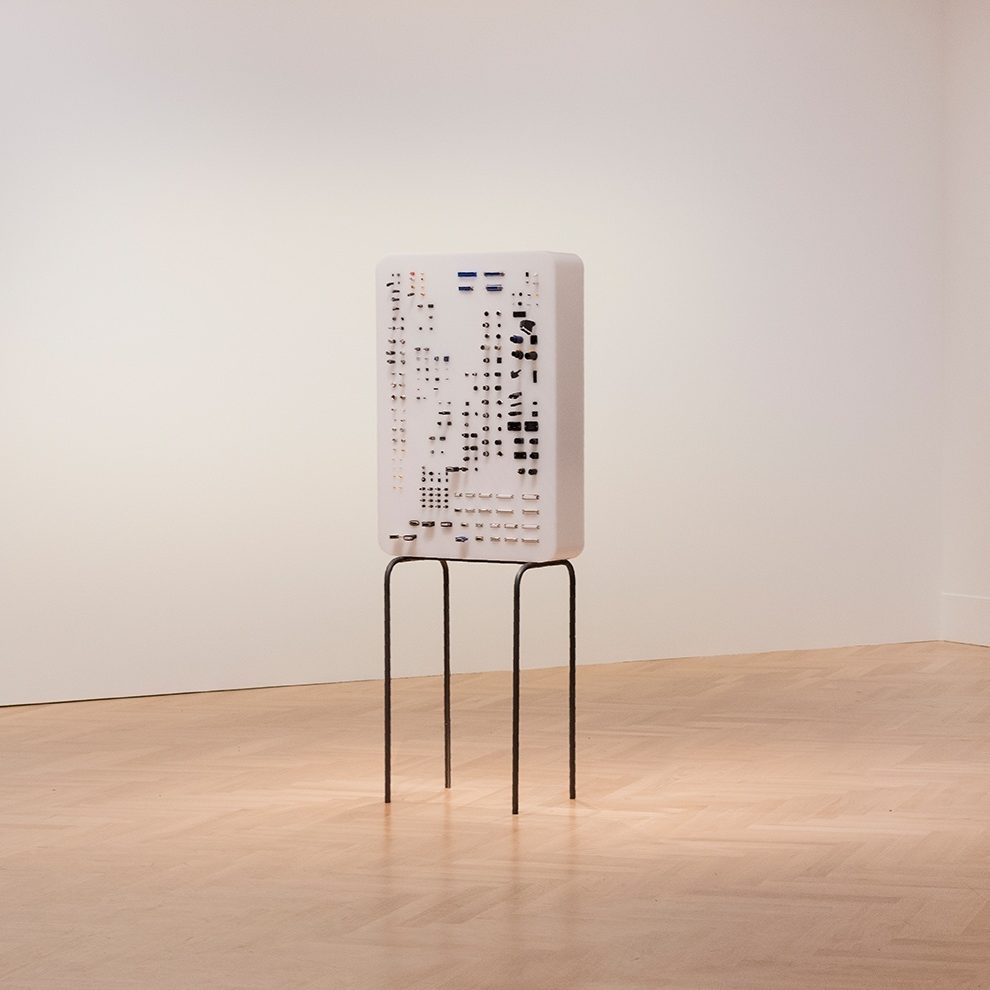 Adapters was created by the media artist Stefani Glauber in 2018 and is now owned by the Landesbank Baden-Württemberg. It is a “super adapter” that – as the artist claims – “combines all European plugs”. Adapters originated from Stefani’s job on digitalizing content from devices from different times, such as video cassettes, discs, CDs etc. The respective recording devices all needed different plugs. During the job, she increasingly grew frustrated with being unable to properly name the plugs and started to fear the mansplaining of the IT-staff. So, she started digging into the history of plugs and discovered that there was no extensive documentation of them at all. This might not come as a big surprise to a lot of us, but would, say, for a media archaeologist. The field of media archaeology is fluid and, rather than by one orthodoxy, is defined by several voices, such as Erkki Huhtamo’s or Siegfried Zielinski’s. Jussi Parikka’s approach is the most compatible with Adapters. To him, media archaeology is theorizing on material media culture from a historical perspective. Most defining to media archaeologists is, however, to abandon the notion of linear progress. For an as open gaze as possible on media technologies, issues like the imaginary of media or the invention of alternative artefacts are explored. As Stefani Glauber imagined in a sort of steampunk-attitude a “super adapter” that would be able to satisfy all plug-needs throughout the world and through time, her work can be seen as artistic research into media archaeology.

Adapters is tall – with the pedestal it measures 1,80 metres. It is an ashlar made from white plastic with more than 220 plugs systematically attached on both sides. It triggers the imagery of being stacked up in offices in an old-fashioned now with people flocking around it to use the right plug. Its size and clear and concise appearance give it some aura of functionality and importance. But, as we all know, its existence will be soon completely superfluous – actually, never was necessary. It is like observing somebody taking oneself very seriously, when actually not playing that big of a role. A subtle humour often lures in Stefani’s work. As Stefani Glauber says, she made Adapters for the joy of knowing it existed. Her artistic approach is nourished by the image of a handicraftsman or inventor, who is constructing alternative objects. Due to the troubles, she encountered when digitalizing content from different devices, it seemed like a logical thing to her to craft a universal adapter. It is, thus, a playful work. For me, this is what is remarkable about the artwork. Playfulness is sometimes seen as apolitical. But in a world where the norm is to function, be effective or position oneself, the decision not to, can be a political act. The decision to rather play, be ambivalent, and ineffective is a refusal to engage in arguing against or subordinate oneself to the specific rationale of late capitalism. In fact, to play means to act outside the blueprints of societal frames and, hence, to become oneself. As D.W. Winnicott writes in Play and the Sense of the Real (1971), “It is in playing and only in playing that the individual child or adult is able to be creative and to use the whole personality, and it is only in being creative that the individual discovers the self”. With Adapters Stefani followed her own logic and created something that was from the point of view of effectiveness illogical. Nonetheless, to her, it is an artwork that makes sense. To her, particularly the prospect of plugs soon to be “extinct” was intriguing. In the process of cloud computing and Bluetooth connection and without anybody documenting them, they will soon be completely forgotten. This disappearance of the plugs – ubiquitous yet unnoticed – compelled her to give them centre stage for the last time. Giving adapters such a prominent frame, when they are already on the verge of being forgotten and have never really got any attention at all, feels like some sweet joke on the passing of time and what we take for important.